SENEGAL, GAMBIA & GUINEA BISSAU
This itinerary is part of Sahara & West Africa Grand Expedition from Marrakech to Dakar and Cotonou.
Rich in anthropology, history and prehistory, enjoying a perfect balance of drives and navigations. Starting from Cap d’Almadine in Dakar, the western point of African continent, going South and East: The Gambia and its birds, Casamance and the animistic mask dances. Ending with a navigations to the remote Bijagos Archipelago…
DEPARTURES: 12 December 2021;  30 April 2022 (reverse itinerary);  11 December 2022 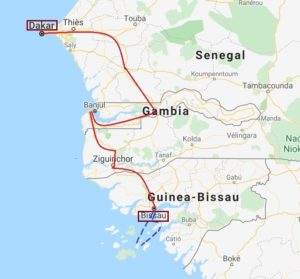 An exploratory itinerary rich in anthropology, history and prehistory, enjoying a perfect balance of drive and navigations. Starting from Cap d’Almadine in Dakar, the western point of African continent, going South and East: The Gambia and its birds, Casamance and the animistic mask dances to end with a navigation to the remote Bijagos Archipelago.
The itinerary, part of the  Grand Expedition across West Africa, will be adventurous and enjoyable in comfortable air-conditioned 4WD vehicles and minibuses. On Ocean and lagoons: speed boats for major navigations and local boat for short sails.
Accommodations: in the capitals, 4 stars hotels with possibility to upgrade to 5 stars. In the inland the best accomodations available: mainly new 3 stars hotels with en-suite and air-conditioned rooms.

Day 2: DAKAR, AFRICAN METROPOLIS    Senegal
Lac Rose, also known as Lac Retba, is a shallow saltwater lake surrounded by dunes. Due to the high concentration of salt, the lake often shimmers in pink; swimming in the lake gives the sensation of floating. More than 600 people work collecting salt from the lake, in the traditional way.
Arrival to Dakar, start the visit of the town: Dakar became an important centre of political, artistic and intellectual “renouveau” during the independence, and is still a lively African metropolis. Visit to the “Plateau” district, the Presidential Palace a typical market and an interesting museum.
Ferry to Gorée Island: the right times to enjoy Gorée is at sunset when all tourists are gone or in the morning before the crowd arrival.

Day 3: GOREE ISLAND   Senegal
In Gorée island slaves were crammed, waiting to be shipped to the Americas. The island is totally restored to bear witness of those times. Today its breezy climate, history and ancient architecture, together with nice restaurants and boutiques, make Gorée an interesting and trendy destination for local and foreign visitors. Ferry to Dakar and visit of the town.

Day 4: GAMBIA, BETWEEN ARCHEOLOGY AND CONTEMPORANEITY   Senegal / the Gambia
Early departure, the region between the north bank of Gambia River and Senegal have hosted one of the largest megalithic civilisations on earth . Sine Ngayene is the richest Megalithic site with 1102 erected stones. Border of Gambia and a “very local” ferry crossing of the large Gambia River estuary to reach Banjul, the capital. Visit of the town centre, and the interesting national museum.  Optional: music in town.

Day 5: DANCING MASKS   The Gambia / Senegal
Morning, brief but intense guided bird watching experience.
Departure for the border with Casamance, the southern region of Senegal.
Late afternoon we will join the ritual dances of Diola sacred mask. The masks belong to a secret society and the identity of the dancers cannot be revealed as it is said that the mask is animated by the spirits. Drums, dances and a colourful crowd will enliven the tiny village in the shade of larges kapok trees.

Day 6: ANCESTORS’ CULT   Senegal / Guinea Bissau
Crossing the Guinea Bissau border.  The Manjaco ethnic group calls the traditions “Gendiman”. We will visit tiny villages hidden in the forest to discover the sculptured wooden poles called “Pecab” that represent the spirits of their ancestors, in a sanctuary known as “Cab Balugun”. After asking permission to the villagers, we will have the opportunity to see different generations and styles of sacred wooden sculptures; one of the last chances to enjoy tribal art in its original cultural context. Arrival at Bissau.

Day 7: BIJAGOS SACRED ARCHIPELAGO: THE GHOST CAPITAL   Guinea Bissau
We will start a spectacular three-days navigation on a speedboat to discover the Bijagos Archipelago, its fascinating nature and isolated tribes. The Archipelago, composed by 88 islands and islets, is located at an average of 40 miles from the coastline. Bijagos is a “geographical jewel”.
Bolama was the former capital of the Portuguese Guinea from 1871. In 1941 the capital was moved to Bissau. When the Portuguese left, native people came to live in this town which is now falling apart, partly invaded by tropical vegetation. Built according to the plans of a «Castrum Romane» (roman citadel), the town is made of straight large avenues, sunny and lethargic empty squares, dry fountains, bush-like gardens, imposing administrative buildings in neo Palladian style. In the shade of the columns at the former governor palace goats graze peacefully. Although inhabited, this capital town is plunged in the fairy-tale atmosphere of a ghost town.

Day 8: VACA BRUTO DANCING CEREMONY   Guinea Bissau
Short navigation to Bubaque island, the “capital” of Bijagos Archipelago, its market and the tiny museum.
Afternoon: due to the remoteness, the lack of transports and the deep attachment of the locals to their traditions, the Bijagos tribes have been little influenced by the external world. Life in the villages is characterized by initiations rites and secret ceremonies. In some villages, the young men must go through a seven-year initiation rite living in a “convent” with no contact with women. With its wild and idyllic landscapes, and a genuine tribal culture, Bijagos Archipelago is a “geographical jewel”. In Bijagos Archipelago life is still ruled by the “cycle of seasons”. During the long dry season, when the harvest is over, the main ceremonies take place. Vaca Bruto (wild bull) is the most spectacular mask in the islands, the dancers convey the mask a realistic presence by bowing and facing the ground.  With eyes of frosted glass, real horns, leather ears and a rope through the nostril. All convey the idea of a real untamed animal, representing a man in full possession of his physical strength but still with an immature behaviour as he has not yet undergone the final initiations. All the villagers attend this fascinating ceremony.

Day 9: ISLANDER LIFE    Guinea Bissau
Morning relax on wild beaches and swimming pool, or walking excursion in the island.
Afternoon navigation to Bissau.
A vehicle will be waiting us for a brief city tour. Bissau is a tiny but intriguing capital town with old Portuguese architecture and a huge fort, a reminder of the slave trade era. Speed boat sailing to Bissau, short visit of this tiny capital with the old Portuguese quarters, and the artisans market. Transfer to the airport.

On request (not included) Early morning departure for an excursion to Orango Island in search of a residual fauna of Hippos that has acclimatised with the life on islands. Mainly living is fresh-water swamps, some time they could swim in the ocean. Local guide will lead the visitors, hippos are not granted.

UNIQUE DEPARTURES: This itinerary is part of West Africa Grand Expedition from Dakar to Cotonou.

EXPEDITION LEADER: Alberto Nicheli, TransAfrica founder, has been travelling in West Africa since  1975. He has led more than a hundred expeditions in West Africa and 64 Sahara expeditions, including solo crossing of the desert, ethnological research on Tuareg and rock art. He has organized the logistics of a documentary film for Discovery Channel on the Caravans of the Niger and has assisted in numerous research projects on West Africa with Angela Fisher and Carol Beckwith from National Geographic, as well as in different television programs on West Africa. He is an expert in Tribal Art.

EXPLORATORY ITINERARY: This itinerary is part of an expedition; participants must be flexible and ready to enjoy the unique encounters but also some unexpected situations that are part of the “African Experience”.

LUGGAGE: due to the exploratory itinerary, please to be contained in 20 kg (45 Lbs.) suggested duffle bags.

MEALS: lunches: cold meals (picnics or sandwiches and fruit) or at restaurants. Dinners: at the hotel restaurants (pre-select menu). Included one bottle of water each day during the visits.

NOTICE: The itinerary discover fascinating sites, where the visit of a foreigner sometimes remains an exceptional event. Participants need to be cooperative, tolerant and flexible to fully enjoy their tour and appreciate the unique nature, as well as the spontaneous hospitality of the local populations, African magic and mystery, its metaphysics, ceremonies, life philosophies and religious beliefs that people are willing to share with us.
Itineraries, visits and overnight accommodations are subject to change or modification by the organizer due to force majeure and can be modified or adapted to local conditions.

This website makes use of technical cookies and, prior your consensus, of profiling cookies, of third parties, for advertising scopes and to improve services and the users experience. For more info or to deny your consensus, read the whole disclosure. If you decide to go on browsing and by closing this banner, instead, you give your consensus to all the cookies.