GHANA
A journey to be fascinated by the frenetic rhythm and the movements of the dancers. Let yourself be amazed by the abundance of gold during the Ashanti celebrations and be stroke when visiting the castles of the route, the fortified houses of the Gurunsi, the “witches” women, and much more.
DEPARTURES:

Join our 13-day adventure to the heart of West Africa through an expedition-like journey across Ghana, a country that is incredibly rich in traditions and yet is experiencing ever-increasing modernity.
A tour for travelers in love with timeless West Africa, a variety of landscapes and tribes, local markets rich in colors, spices, and smells, frenetic yet delicate rhythms, rituals, and dances. For those who are interested in the uniqueness of the Ashanti traditional ceremonies. We visit the castles which served the slave trade. We satisfy our hidden curiosity about witchcraft, we will visit a village entirely inhabited by witches! Special events: a royal festival in the Ashanti kingdom and an intriguing voodoo ceremony. In the north, we will walk in one of the few National Parks in West Africa, which deserves a visit, the Mole Park. A tour mixing people and nature, history and present, with an eye to Africa building its future. Accra is one of the most vibrant cities in Africa. 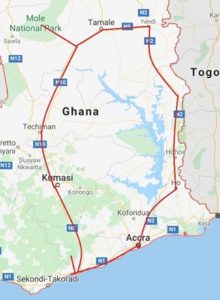 Day 1: ACCRA, GULF OF GUINEA
Arrival in  Accra  (Ghana) and transfer to the hotel.

Day 2: AFRICAN METROPOLIS
Accra, the capital of Ghana, has maintained its unique identity despite the fast-paced development currently underway in this intriguing African city. The luxuriant administrative area, punctuated with elegant villas built during the first half of the 19th century, reminds us that Ghana was one of the most flourishing British colonies in West Africa. Facing the Ocean is where local native people’s life fully unfolds, a village surrounded by the city! Here all economic activities follow very different rules from the ones governing “the city” (business area), just a few hundred meters away. Our tour continues with a visit to a workshop where that specializes in building fantasy coffins. These special handcrafted coffins can reflect any shape such as fruits, animals, fish, cars, or airplanes, the only limit being imagination!

Day 3: SLAVES ‘TRADE CASTLES
In the morning, we will experience the thrill of a “canopy walk” right in the deep forest of the Kakum National Park: one of the world’s highest suspended rope bridges held by steel cables. Perched 37 meters (120 feet) above the earth, you will enjoy a stunning view of the rainforest and instead of unveiling their trunks, trees will reveal their tops! In the afternoon we visit Elmina Castle, the oldest European building in Africa, erected by the Portuguese in the 15th century. At different times the castle has been used as a warehouse to trade gold, ivory, and eventually slaves. The castle we visit today is the result of successive extension works and is recognized as a UNESCO World Heritage Site. The old Dutch Cemetery in Elmina goes back to 1806. Outside the castle, a wonderful fishing village with lots of large colorful fishing boats – every day these canoes are guided by skilled fishermen across strong ocean waves and currents, “fighting” to earn a living. In the old town, we will see the Posuban, the shrines of the old “Asafo companies” – the warriors who used to put their offerings on the large colorful statues. The alleys in the old town have a very lively atmosphere.

Day 4: ASHANTI
Late morning arrival in Kumasi, the historical and spiritual capital of the old Ashanti Kingdom. The Ashanti people were one of the most powerful nations in Africa until the end of the XIX century when the British annexed Ashanti Country to their Gold Coast colony. The tribute paid today to the Asantehene (King) is the best evidence of their past splendor and strength. With nearly one million inhabitants, Kumasi is a sprawling city with a fantastic central market, one of the biggest in Africa. Every type of Ashanti craft (leather goods, pottery, Kente cloth) is found here, along with just about every kind of tropical fruit and vegetable. The program includes a visit to the Ashanti Cultural Center, a rich collection of Ashanti artifacts housed in a wonderful reproduction of an Ashanti house.
In the afternoon we participate (if available) in a traditional Ashanti funeral, attended by mourners wearing beautifully red or black togas. We say “funerals” but it means a “festive” celebration, the deceased are in fact believed to be still with his / her family di lei and through this ceremony, he/she becomes an ancestor. Relatives and friends gather, socialize and celebrate his / her di lei memory of hers di lei. The chief arrives surrounded by his court di lui under the shade of large umbrellas while drums give rhythm to the dancers whose intricate moves are highly symbolic

Day 5: GOLDEN KINGDOM
On a Sunday morning, Kumasi wakes up slowly and the streets of the city, not too busy, become like a charming and interesting stage to any curious traveler, the colonial buildings around the market, the very original hand-painted advertisement signs (real urban art!), the railway lines crossing the central market, the devotees going to church in their Sunday clothes – so out of fashion to actually be of great fashion! We also will visit the Royal Palace Museum which hosts a unique collection of gold jewels worn by the Ashanti court and a few nearby villages specialized in weaving the traditional Kente cloth, praised by the socially important people and used to make special ceremonial stools.

Akwasidae Festival. On the Ashanti calendar certain days, each year are set aside for a very special celebration at the Royal Palace in Kumasi and this traditional ceremony takes place in one of the last African Kingdoms which has maintained its ancient rituals still alive.

Day 6: SAVANNAH
After a long transfer, we reach Mole Reserve.
Stop to visit friendly villages and colorful markets on the way.

Day 7: WILDLIFE, DRIVE, AND WALK IN MOLE NATIONAL PARK
Mole: the largest, oldest, and most developed park in Ghana. It covers an area of ​​4,912 sq. km.
The vegetation is savannah woodland with gallery forest along watercourses. 734 species of flowering plants have been recorded in the park. 90 mammalian species including elephant, buffalo, roan, kob, hartebeest, waterbuck, reedbuck, and other antelopes.
Among the estimated 500 elephants found at the Mole National Park are three relatively “tame” individuals.
Because of the good protection given to animals in the Park, the elephant has generally become used to visitors and allows them to get close during the guided tours of the Park.

Day 8: THATCHED ROOFS
Further to the North East, in the savannah, we meet the Dagomba, a tribe that represents one-eighth of the entire Ghanaian population. They are mainly farmers and have always shared their territory with other tribes such as the Konkomba. They build round clay huts with thatched roofs. The house of the village chief, where the council of the elders meets, is easily recognizable thanks to its larger size and style, it has a central pole supporting the roof and the entry is framed with pieces of burned clay.

Day 9: WITCHES
We will meet a very large settlement of witches! All are exiled from their villages because they’ve been found guilty of terrible events such as the death of a teenager, a mysterious disease, or a bad harvest and they now live all together in a specific place. We will chat with them about their life and about the special shrine which protects them, “cleansing” their spirit from bad will. Their warm welcome is a dramatic contrast with the gravity of the stories that forced them to come here.

Day 10: WATERFALLS
Volta Region, from Savannah to tropical forest. Visits of coffee and cocoa plantations in a luxuriant region; stops in small villages inhabited by a very friendly population, happy to welcome the rare visitors. We will discover the beautiful Wli Waterfalls, on the border with Togo, where the water falls from a height of 60-80 meters. The walk to reach the falls is approximately 45 minutes (nice flat path) and it will allow us to see some of the 200 species of birds and the 400 species of butterflies that have been identified in the region. It will be possible to hike on the upper part of the waterfall.

Day 11: GREEN LAND
We drive to the Volta Region.
The Monkey Sanctuary of Tafi Atome was created in 1993 to protect a community of sacred monkeys living in the forest. According to century-old traditions, in this village monkeys and tortoises are considered sacred species thus demanding respect and protection. In particular, the monkeys are the “spokesman” of tortoises. We will take a lovely walk in the forest led by a local guide to encountering the great community of Monas and Colobus monkeys.
Amedzope is the highest-located village in Ghana (756 m). We reach the village by a winding road running through a green forest. We enjoy the view of the valley.

Day 12: VOODOO: AKOSOMBO REGION
We attend a Voodoo ceremony: the frenetic rhythm of the drums and the chants of the adepts help call in the voodoo spirit who then takes possession of some of the dancers. They fall into a deep trance, eyes rolling back, grimaces, convulsions, and insensitivity to fire or pain. Sakpata, Heviesso, and Mami Water are just some of the voodoo divinities who can show up. In this narrow village, surrounded by the magic atmosphere of the ceremony, we will finally understand what people mean when they say: “In your Churches, you pray to God; in our voodoo shrine, we become God! “
Voodoo is a religion that has been passed on by the ancestors and is still fervently practiced. Although for many Europeans voodoo is only a vulgar form of black magic, in truth voodoo is a true religion, far richer and more complex than people often think.
The area of ​​Krobo is famous all around the world for its beads. Here they are produced and used for cults and aesthetic purposes. We will visit a factory specialized in the production of those beads and even follow the process of making your own beads!
The craftsmen have now been making beads following the same long-lasting traditional technique for centuries. They use scrap glass that they ground into a fine powder. The glass powder is then meticulously made into patterns and placed into hand-made clay molds covered in kaolin. The beads are cooked, then decorated, washed, and eventually strung.

Day 13: ACCRA OUT
Drive to Accra. Today we focus on the very modern soul of Accra.
We will visit some art galleries like Artists Alliance Gallery, Wild Gecko Handicrafts, Gallery 1957, etc.
It won’t be surprising that Accra is the set of the show “an African city” the equivalent of “Sex and the city” created by a Ghanaian woman. We will stroll around the design and clothes shops from the show, hopefully having the chance to meet some designers who could explain to us their works.
Transfer to the airport for the flight out.

LUGGAGE: due to the itinerary please contain the weight in 20 kg ( 45 Lbs), preferable use duffle bags.

All our trips are designed to be flexible so that we can adapt to weather conditions, focus on the group’s interests and take advantage of opportunities that arise once there.

Considering the special nature of the journey, some parts may be modified due to unpredictable factors and are based on unarguable decisions of the local guide. Costs originating from such variations will be sole responsibility of the participants. Of course, the guide will do his/her utmost to adhere to the original program.

Prices could change in case of major changes in services costs, beyond the organizer’s will

Prices do not include :