The Krobo region is famous for its pearls and for its initiation rites which only apply to girls.
Dipo is the name of the “process” through which a young girl becomes an adult woman, fully integrated into her society. 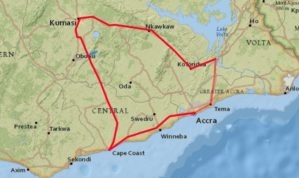 The Krobo region is famous for its pearls and for its initiation rites which only apply to girls.
Dipo is the name of the “process” through which a young girl becomes an adult woman, fully integrated into her society Di lei.
Aboakyer Festival, also known as the ‘deer hunting festival’, is organized in honor of the tribal God of Winneba, a fabulous opportunity to experience the climax of a Fanti festival.

Day 1:  Accra in
Arrival and transfer to the hotel.

Day 2: Glass beads, Accra – Akossombo (95km, 2h)
Morning transfer to Akossombo, the capital of the Volta Region which is the land of the Krobo people. Here we attend the Dipo celebrations. Krobo people are well known for their production of glass beads, usually family heritages, they are shown during the Dipo celebrations. Depending on the schedule of the Dipo rite, we will visit an atelier where they make glass beads according to tradition. The process involves different stages: scrap glass is first ground into a fine powder, then it is meticulously made into patterns and placed into hand-made clay molds, covered in kaolin to be baked. We will have the time to learn and produce our own beads.

Day 3: Dipo celebrations Akossombo (various transfers)
Dipo: the female initiation rite among the Krobo People.
A female initiation rite aims at turning a girl into a woman. The entrance into womanhood is led according to tradition and girls who successfully go through this rite can become good wives. The girls undergo a series of rituals, tests, and tasks to prove both their chastity and they’re being ready for adult life.
During the final steps of the Dipo rite, the girls have elegantly decorated: colorful assorted beads adorn their exposed upper parts while from waist to knee they are covered in beautiful fabrics. Their breasts are bare for everyone to see.
During the ceremony, the girls appear in public in their ceremonial dress and then their heads are shaved leaving only a small portion of hair on the head; a piece of raffia is tied around their neck to indicate they are Dipo-yi. On the next morning, the girls are given a ritual bath in a river and then are required to taste foods like sugar cane and peanuts. They will learn women’s tasks and once the rite is over, they will return from a secret place adorned with glass beads necklaces, and wrapped in beautiful textiles: it is the time of the celebration. They are newborns! The day after they will dance for the community asking for money.
In accordance with the schedule of Dipo, we will join a Voodoo ceremony which is part of everyday life in the villages. The frenetic rhythm of the drums and chants of the adepts help call in the voodoo spirit who then takes possession of some of the dancers. They fall into a deep trance: eyes rolling back, grimaces, convulsions, insensitivity to fire or pain. Sakpata, Heviesso, and Mami Water are just some of the voodoo divinities who can show up. In a village, surrounded by the magic atmosphere of the ceremony, we will understand what people mean when they say: “In your Churches, you pray to God; in our shrines we become Gods! “

Day 4: Ashanti Akossombo – Kumasi (250km, 5.30h)
In the morning, transfer to Kumasi, the historical and spiritual capital of the old Ashanti Kingdom. The Ashanti people were one of the most powerful Kingdoms in Africa until the end of the 19th century when the British annexed Ashanti Country to their Gold Coast colony. The tribute paid today to the Asantehene (King) is the best evidence of their past splendor and strength. With nearly three million inhabitants, Kumasi is a sprawling town with a unique central market, one of the largest in Africa. Every kind of Ashanti craft (leather goods, pottery, Kente cloth) is found here, along with just about every kind of tropical fruit and vegetable.
The program includes a visit to the Ashanti Cultural Center: a rich collection of Ashanti artifacts housed in a wonderful reproduction of an Ashanti house. In the afternoon we participate (if available) in a traditional Ashanti funeral, attended by mourners wearing beautifully red or black togas. We say “funerals” but in reality, it is a “festive” celebration: thanks to this ceremony the deceased return as an ancestor and will protect his family. Relatives and friends gather, socialize, and celebrate his / her memory of hers. The chief arrives surrounded by his court of him under the shade of large umbrellas while drums give rhythm to the dancers, whose intricate moves are highly symbolic of war and erotic meanings.
If available, meet with a Fetish Priest who will allow us to participate in his rituals by him.
The Ashanti religion is a combination of spiritual and supernatural beliefs. They believe that plants, trees, and animals have souls. Their pantheon is composed of ancestors, abosom or higher gods, and ‘Nyame’, the foremost being of Ashanti. Fetish priests are key figures. Intermediaries between the spirits’ world and human beings. They fall into trance, practice oracles, and treat diseases.

Day 5: Chief, Kumasi (various transfers)
In the morning continuation of the tour of Kumasi, with the visit to the Royal Palace Museum hosting a unique collection of gold jewels worn by the Ashanti court.
One cannot visit Kumasi and the Golden Ashanti kingdom without meeting one of its many traditional kings! We are privileged to be allowed into the courtyard of a great Ashanti chief. Wrapped in traditional cloth and adorned with antique solid gold jewels, he will take a seat under a large colored umbrella and discuss his role di lui as a traditional chief in modern Ghana.
In the afternoon visit villages devoted to the production of cloth, and carvings.

Day 7: Cape Coast   Elmina – Winneba (97KM, 2H)
The day starts with a visit to Cape Coast castle, built by the Swedish in 1653. From 1657 to 1664 it changed hands many times as it was conquered by the Danes, the Dutch, the Fanti (a local tribe), the Swedes, and finally the British. Today, it hosts a museum on the history of the slave trade.
In the afternoon transfer to Winneba where the atmosphere will be joyful, and people are getting ready for the next day’s festival. We will walk around taking the opportunity to join the excitement. Fetish priests and worshipers pour libations to the shrines and then walk across the town with their fetish.

Day 8: ABOAKYER FESTIVAL
We will attend the Aboakyer celebrations.
Aboakyer, also known as the ‘deer hunting festival’, is organized to honor the tribal God of the town. In this festival, God Penkye Otu receives the sacrifice of a deer. The festival originated about three hundred years ago when Winneba was first settled. People believed they managed to establish their homes here only thanks to the help of their God and they are still under its protection. This festival is the expression of their gratitude. Aboakyer Festival involves two groups (Asafo Companies) of people in Winneba, the Tuafo and the Dentsifo. They compete with one another to go into the bush and be the first to catch a deer armed with only clubs. The group which first catches the animal rushes back home singing war and victory songs. The deer is then presented to the Omanhene who places his bare right foot three times on it. After completing this ritual, the deer is lifted and carried through the town streets by a singing and dancing crowd to the shrine of Penkye Otu. In the final act of the festival, the Tuafo and the Dentsifo come together in front of their God and sacrifice the deer.

Day 9: African Metropolis, Winneba -Accra (69KM, 2H)
Morning transfer to Accra, the capital of Ghana.
Today we will focus on James Town: the original settlement of the city inhabited by the Ga people. Other than enjoying the atmosphere we will visit the reminisces of the time of the slave trade and the old lighthouse. We will try to visit one of the many boxing gyms: the popular sport among the youngsters lastly, we will see Jamestown Cafe to see what they are doing to foster community, the exhibit at ArchiAfrika, and the graffiti space across the way.
We end the day with a visit to an atelier specializing in “fantasy coffins “. These unique handcrafted coffins can reflect any shape: fruits, animals, fish, cars, or airplanes…. Imagination is the only key! Started in Accra, these flamboyant coffin designs are now collected worldwide and exhibited in museums.

Day 10: Accra West End
Today we focus on the very modern soul of Accra. We will visit an art gallery and meet with the artist/gallerist.
It won’t be surprising that Accra is the set of the show “an African city” the equivalent of “Sex and the city” created by a Ghanaian woman. Depending on the flight schedule, we will stroll around the design and clothes shops from the show, hopefully having the chance to meet some designers who could explain their works.
Transfer to the airport for the flight out.

Due to the characteristic of the trip, the itinerary might be modified in order to match with the traditional events
Twin rooms (two beds apart) are very limited. Please check the availability with TransAfrica when booking