MAURITANIA
This itinerary is part of  Full Expedition in Mauritania. A new expedition through Mauritania, an itinerary which is the outcome of many years of research in the Sahara. After a transfer from Nouakchott, the 4×4 expedition starts in Chinguetti, one of the most well conserved oases in the whole Sahara.
An “out of any track” exploration to try to spot Aouelloul crater, created by the impact of large meteorite more than tree millions of years ago, we drive to Ouadane,  founded “just” in 1147 of our era. It is the remotest oasis in Mauritania, the western outpost before the total emptiness… Where we will continue…
Led by ALBERTO NICHELI

A new expedition through Mauritania, an itinerary which is the outcome of many years of research in the Sahara. After a transfer from Nouakchott, the 4×4 expedition starts in Chinguetti, one of the most well conserved oases in the whole Sahara.

An “out of any track” exploration to try to spot Aouelloul crater, created by the impact of large meteorite more than tree millions of years ago, we drive to Ouadane,  founded “just” in 1147 of our era. It is the remotest oasis in Mauritania, the western outpost before the total emptiness… Where we will continue.

Guelb er Richat is called by the geologists the “eye of Africa”: a geological mystery, is series of three concentric rock circles, the largest has a diameter of 40 kilometres (25 mi). The rarely visited El Ghallaouiya canyon hosts more than six hundred graffiti figures, depiction of warriors, chariots, hunters, wild animals, and more, a unique “open sky gallery” going back thousands of years at the time before the desertification, when the desert was a green savannah.  From El Ghallaouiya canyon landmark starts the more intense exploration: beyond the horizon, hundreds of kilometres of virgin sand and dunes ranges. We will “navigate” Erg Ouarane immensity . For days the only human traces that we could find will be prehistorical stone tools.

We will search for a pass between Aoukar mountain chain to try to explore the Aoukar depression that was, before the desert era, a large lake with populated shores. South of the prehistorical lake we will search for Aoudaghost archaeological site with miles of ruins hidden by the mountains. Aoudaghost has been the northern town of the Ghana (Gana) Empire, the oldest known Empire in Black Africa, dating back to the VI century. Aoudaghost was a rich trading centre, where gold dust was traded. In the ancient manuscripts it was described, by the Arab chroniclers, as a town like Mecca. We will explore paved alleys, remains of stone building in the surrounding  deep caves hiding large jars, and… skeletons. Only few sites of Aoudaghost have been studied by the French archaeologists in the early ’60, the traces of the excavation have disappeared, covered by the sand and we will have the impression to be the first. Finally, we reach the town of Kiffa, renowned for the traditional glass beads produced by Moorish women. If lucky we will be invited in a large tent to view the process of smelting glass. Before returning to Nouakchott 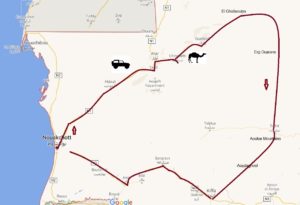 Day 1: ARRIVAL IN MAURITANIA
Arrive early this morning in Nouakchott and transfer to a comfortable hotel  At about noon, meet with the group, have lunch and then depart on an asphalt road to Akjoujt where we spend the night in hotel.

Day 2: NORTH, IN THE DESERT
Full day drive to the north part of the country. On a scenic tared road between dunes, before Chinguetti the road comes more spectacular in the Adrar mountains.
Arrival to Chinguetty and meeting with Alberto Nicheli that will lead the expedition.
Dinner and overnight at “La Gueila” (or private residence).

Day 3: ABOVE AND BEYOND
Out of any track a discovery itinerary to Aouelloul meteorite crater. With a diameter of 833 ft.  (250 m.) this roughly round shape crater dates back to the Pliocene (+/–  3 million years ago) it was originated by the crash of a large rock from the interplanetary space. Samples of silica glass were found nearby. Return to our base in Chinguetty. Dinner and overnight at La Gueila guest house.

Day 4: THE EYE OF AFRICA
Ouadane built on a rocky hill is the remotest oasis in Mauritania, an outpost facing the immensity of the desert was founded in 1147. Mainly in ruin, some of his stone houses are still inhabited. In the ancient days this Ouadane was a caravan trading point between Maghreb and black Africa.
Commerce was so flourishing that in 1487 Portuguese built a fortified trading counter in the region.
Guelb er Richat is a geological mystery, called by the geologist the “eye of Africa” is a landmark for the astronauts. Three concentric rock rings with an interior depression, the largest ring has a diameter of 40 kilometres (25 mi). Geologist had formulated different hypothesis on his origins: the oldest was that the phenomena was caused by an enormous meteorite that fell on earth. The more recent theory believes that is the result of erosion on a large dome. Camp in the desert.

Day 5: ROCK ART, OPEN SKY RETROSPECTIVE
Off-road itinerary between spectacular rocks chains with an astonishing view on the desert and possible encounter with remote groups of nomads.
The well of El Beyyed is on an ancient paleo-soil rich in stone tools like harrow heads, axels, millstones; from the peoples that lives these lands 700.000 years ago. The abandoned fort of El Ghallaouiya built by the French colonial “camel battalions” has the typical atmosphere of the foreign legion. The canyon of Trig Chauail is an impressive spectacle: any flat surface of rock is covered of petroglyphs. We can discover more than 220 panels with 600 subjects, a real “open sky” gallery, a retrospective exhibition on the last 6000 years of Rock Art, from the time before the desertification displaying with wildlife, horse riders, chariots… Camp in the graffiti canyon.

Day 6, 7, 8: IMMENSITY
Departure for the total empty. Out of any track trough the immensity. Erg Ouarane is a more than 800 Kilometres of continues dunes and virgin sands over the horizon  a pure Sahara experience.
GPS, compass and years of experience, will help us to navigate one of the less known part of Sahara, the largest and desert on Earth, in its more perfect form, as only imagination can represent it.  Camp between the dunes.

Days  9 & 10: AOUKAR
The arrival to Aoukar rocky chain is memorable. Aoukar mountains chain is as difficult as spectacular. It was the shore of a lake, now vanished in the desert, and remains of prehistorical villages are hidden between rocks and sand.

Days 11 – 13: AOUDAGHOST
We will start to drive through a unique landscape crossing sand dune, lakes, acacia forests and nomadic encampments. The highlight of the itinerary is the archaeological site of Aoudaghost with its miles of ruins hidden in the mountains. Aoudaghost is believed to have been the northern town of the Ghana Empire, the oldest known kingdom in Black Africa dating from the 6th century.
Aoudaghost was a rich caravan town, its main trade being gold. In ancient Islamic manuscripts it was described as like Mecca. In those days the whole region was inhabited. Exploring deep caves using the light of torches we will find ancient clay granaries that are hidden there, the cave entrances are fortified by stonewalls.  Only a few areas of Aoudaghost have been studied by French archaeologist in the early ’60 today the sand has covered any trace of the research. Thanks to the remoteness these sites are rarely visited.

Day 14: KIFFA
Our destination will be Kiffa, renowned for its traditional glass beads produced by Moorish women.
If lucky we will be invited in a large tent to view the production process that starts by smashing up glass.

Day 15: THE ROAD OF HOPE
This asphalt road, known as “la route de l’espoir” (the road of hope), links south western Mauritania with the coast and the capital.

Day 16: BACK TO NOUAKCHOTT
Expected arrival in Nouakchott during the evening of the 27 Jannuary 2021. Day room available. If request, transfer to the airport. End of our services.

EXPEDITION LEADER: Alberto Nicheli, TransAfrica founder, has been travelling in West Africa since  1975. He has led more than a hundred expeditions in West Africa and sixty-four Sahara expeditions, including a solo crossing of the desert, ethnological research on Tuareg and rocky painting. He has organized the logistics of a documentary about the caravans of the Niger for Discovery Channel and has assisted Angela Fisher and Carol Beckwith from National Geographic and in numerous research projects and television programs on West Africa. Alberto has an expertise in tribal art.
Alberto Nicheli will lead the expedition from day 3. An English speaking local guide will take care of the arrival transfer and guide the group to Chinguetti on the main road.

EXPLORATORY ITINERARY: This travel program is an exploratory expedition. Scheduled itinerary, visits, and stages are given just as an indication and could be changed at the solo decision of the Expedition Leader.
Wind, visibility, land conditions, local authorities decisions, events of “force majeure”, technical, mechanical or other unexpected events may delay or change our schedule. TransAfrica can’t  be considered liable for any changes and delays.
Participants must be flexible to full enjoy the unique encounters, as much as some unexpected situations that are part of the “African experience”.

MEDICAL and VACCINATIONS: Malaria prophylaxis: absolutely recommended for the first and last part of the itinerary (From Nouakchott to Chinguetty and from the Aoukar to Nouakchott).
Due to the Covid 19 crisis, in the mutual interest of each participant, bring a recent (-72 hours) test that grant  your negativity.
Now (October 2020), Mauritanian authorities does not request a Covid test, but could be requested at the time of our arrival.

CAMPS: camping in the immensity of Sahara is an unforgettable experience. Igloo tents fitted for tropical climate; camping mattress included. Please bring your own sleeping-bag . Nights in the Sahara are cold and could be windy.

LUGGAGE: due to the nature of the itinerary, please limit your personal luggage to 45lb (20 kg), soft sacs are recommended.

INSURANCE: mandatory for medical assistance (health care),  repatriation, physical and material damages. TransAfrica will not be held responsible for any material and physical damages during or in consequence of the tour. Discover our insurance policy proposal: https://transafrica.biz/en/travel-insurance-en/;

NOTICE: The itinerary is designed to experience fascinating places where  foreigners hardly arrive. We need to be tolerant and flexible to fully enjoy and truly appreciate the unique nature and wildlife, the spontaneous hospitality of the local populations, the African magic and mystery, the metaphysics, ceremonies, life philosophies and religious beliefs that people are willing to share with us.
Itineraries, visits, overnights and accommodations are subject to changes, improvements and adaptations due to : more recent experiences and news from the fields, force majeure. The changes are decided by the organizer. We are not responsible for any delays and cancellation due to external conditions.

This website makes use of technical cookies and, prior your consensus, of profiling cookies, of third parties, for advertising scopes and to improve services and the users experience. For more info or to deny your consensus, read the whole disclosure. If you decide to go on browsing and by closing this banner, instead, you give your consensus to all the cookies.