BETWEEN FORESTS AND SAVANNAH, 10 days: Senegal & The Gambia

BETWEEN FORESTS AND SAVANNAH, 10 days: Senegal & The Gambia

SENEGAL & GAMBIA
An amazing journey that crosses two countries “from north to south” and that will offer you an incredible variety of landscapes, ecosystems, and human environments. Crossing the desert, savannah, forests, and mangrove swamps, we will discover the history and tradition of West Africa, without missing out on art, culture, and music.
DEPARTURES:

An itinerary crossing two countries “north to south” to experience a continuous change of climatic ecosystems and human environments.

NATURE: we move across an incredible variety of natural environments such as desert dunes, savanna, forest, and mangrove swamps. North to south is also the route of migratory birds, a constant presence along the whole journey. Djoudj in Senegal is one of the main migratory bird sanctuaries on earth and Gambia is a well-known birding destination.

HISTORY, PREHISTORY & TIMELESS VILLAGES: we will discover historical sites such as Goré ancient slave-trade island, Saint Louis – the first colonial capital of “French West Africa”. Dakar, contemporary large capital and African intellectual center since the time before the independence. We will experience the meeting with “Timeless” people as Nomadic herders and remote villages and discover prehistoric sites, with thousand mysterious stone-craved monoliths.

ART, CULTURE & MUSIC: In the northern savannah we will be invited to the camp of nomadic herders and we will meet with the largest religious and peaceful brotherhood that practices an African form of Islam that rejects fundamentalism and violence. In the south, we will be introduced to animistic traditional religions, tribal kings, dancing masks, and remote tribes who still worship ancestor statues; a unique chance to enjoy tribal art in its original contest. In the animistic Casamance region, we will witness the celebrations of the Diola mask, the incarnation of mythical spirits… Masquerade is a unique experience that involves the participation of the entire village in an intense mix of magic, music, and dances. We will focus also on contemporary art and music: Dakar has always been the cultural capital of West Africa. 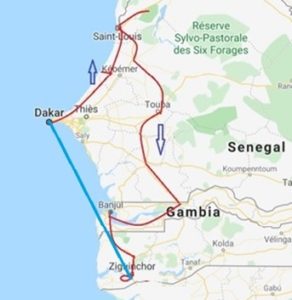 Day 1: DAKAR, THE CAPITAL    Senegal
Arrival in Dakar and transfer to the hotel.

Day 2: DAKAR, CONTEMPORARY ART & GOREE ISLAND     Senegal
Dakar became the center of political, artistic, and intellectual “renouveau” Of the independence time. Visit the “Plateau” district, the Governor Palace, and some interesting markets such as Kermel built in pure colonial style. Lunch in a typical restaurant. Afternoon dedicated to the “Village des Arts” composed of fifty-two artist’s studios (ateliers). All disciplines of the visual arts are represented (painting, sculpture, ceramics, photography, video, installation, etc.). The Village has a large gallery, which hosts exhibitions all year round. The Village is “the place” to meet the best artists and young talents of the Senegalese vibrant artistic scene. Arrival at Dakar harbor to board a ferry and spend a night on Goréè Island. Brief night tour of the island.

Day 3: GOREE, PINK LAKE, AND FISHERMEN’S VILLAGES    Senegal
Waking up in Gorée before the crowd arrives is a pleasure, as strolling in the tiny stone-paved alleys of this historical settlement. In Gorée, slaves used to be crammed and then shipped to the Americas. The town is totally restored to witness those times, however, thanks to the nice breeze, the ancient architecture, and the many restaurants, and boutiques; Gorée today has become a very pleasant and trendy location. Ferry to Dakar and drive to Lac Rose, a shallow saltwater lake, surrounded by dunes, also known as Lac Retba. The water is ten times saltier than the ocean water and thanks to this high concentration the lake often shimmers pink. Workers here collect salt in a traditional way. Along the coast we discover the largest fisherman village in Senegal, more than 4,500 wooden painted pirogues come to the shore with the catch of the day.

Day 4: SAINT LOUIS    Senegal Saint Louis is a charming old town that was the first capital of West African French colonies (AOF). It has been the former base of the “Aeropostale” airmail pioneer operation between Europe, Africa, and South America. Saint Exupéry, the famous author of “The Little Prince”, was one of Aeropostale’s pilots following this route. The best way to visit the narrow lanes of Saint Louis is by calash, just as locals do, and walk in the fishermen’s quarters. Time to stroll in the tiny avenues and enjoy the unique atmosphere of this old town.

Day 5: BIRDS ‘SANCTUARY & NOMADIC PEOPLE    Senegal Early morning departure to discover Djoudj National Bird Sanctuary, a natural oasis formed by hundreds of miles of partially flooded lands that has been declared a UNESCO World Heritage Site. This “humid paradise” is the best habitat and nesting site for over a million migratory and resident birds. Of the more than 400 species, pelicans and flamingos are the most common. Motorboat excursion led by a local guide-ornithologist. Continuation to the Ferlo Desert to discover the arid region where nomadic Fulani tribes herd large droves of zebu. The Fulani (also called Peul) are the largest tribe roaming West African savannahs, living in a vast area from Senegal to Chad.
A local guide will join us for a visit to the neighboring villages and shelters. When the herds come back, we might even be invited to witness the milking process.

Day 6: TUBA BROTHERHOOD    Senegal
The rarely visited holy town of Tuba is the right place to appreciate the hospitality of the African brotherhood. Tuba inhabitants follow Mouridism and the town itself is a sort of theocratic “state within the state”, ruled by a Caliph. The founder of the Mouridi brotherhood was a Sufi named Amhadou Bàmba Mbake and still today the Mouridi have a large social and economic impact in Senegal: thanks to their peaceful (and African) vision of Islam, Mouridism has become the bastion that protects Senegal from radical Islam. Baye Fall, a member of a colorful branch of Mouridism, will accompany us during the visit.

Day 7: STONE CIRCLES    Senegal / The Gambia
Early departure, we will leave the main road to discover the unique megalithic site of Sine Ngayene composed of 52 circles of erected stones, including a double circle. UNESCO has included the 1102 carved stones in its program. After Gambia border formalities, we will drive to the northern banks of the Gambia estuary where we will join a ferry with a colorful crowd to cross this large river.

Day 8: BIRDS    The Gambia / Senegal
With an ornithological guide, we will discover different species of African birds in their habitat. Visit the National museum focused on a different aspect of the country: from archeology to recent history, to art, music, and photography. Lunch and in the afternoon drive to the southern border whit the Casamance region of Senegal. Evening arrival at our comfortable hotel on the banks of Casamance River where we will stay for two nights.

Day 9: SACRED KINGS    Senegal
Visit an adobe-fortified building still inhabited by a large patriarchal Diola family, a very interesting example of traditional African “sculptural architecture”. These large clay and wooden fortified houses, where light comes from a central hole in the roof, are known as “impluvium houses” and had the function to protect dwellers from outside attacks. We will be received by the king of a Diola Kingdom. We follow an isolated path to a tiny village and… masks leave the sacred forest (where only initiated are admitted) to dance for an enthusiastic local crowd. Masks are part of the animistic Diola culture and Malinké traditions: people fear and respect masks, and consider them spirits who play an important role in solving conflicts between villagers.

Due to the limited number of available rooms, please book in advance.

VISAS:
Senegal: not required for EU, USA and Canada citizen (ask for the complete list).If needed, apply for 2 entries visa
Gambia: Some nationalities do not need a visa, for those who need a visa, it can be obtained at the boarder, finally some nationalities have to get an invitation letter, please check it.

LUGGAGE: due to the itinerary please contain the weight in 20 kg ( 45 Lbs), preferable use duffle bags

ACCOMMODATIONS: hotels and lodges are always chosen with maximum care, however due to possible lack of availability in some hotels, the Tour Leader may have to replace some hotels during the tour itself with others of similar standard. In some hotels single rooms are not always granted. Hotels are usually 4* or 3*

All our trips are designed to be flexible so that we can adapt to external conditions, and take advantage of opportunities that arise once there.

Considering the special nature of the journey, some parts may be modified due to unpredictable factors and are based on unarguable decisions of our Tour Leader. Costs originating from such variations will be sole responsibility of the participants. Of course the Leader will do his/her utmost to adhere to the original program.

Prices could change in case of major changes in services costs, beyond the organizer’s will