SENEGAL AT A GLANCE, 9 days

SENEGAL AT A GLANCE, 9 days

SENEGAL
A tour to discover the best of Senegal, travelling along an “uncertain border” between land and water, we will cross different landscapes from the desert to the savannah to experience historical sites, such as Saint Louis and Gorée Island, as well as contemporary sites, like the metropolis of Dakar, the cultural capital of West Africa where many artists from all over the continent get together…
DEPARTURES:

NATURE
Following the “uncertain border” between land and water we move across an incredible variety of natural environments such desert dunes, savannah, estuaries, forest, mangrove swamps. Birds will be a constant presence along the whole journey. Djoudj National Sanctuary in Senegal is one of the main migratory bird sanctuaries on earth.
HISTORY, PREHISTORY & TIMELESS VILLAGES
We will discover historical sites as: Dakar, contemporary metropolis, large capital and African intellectual center since the time before the independence. Gorée, ancient slave-trade island; Saint Louis, the first colonial capital of “French West Africa”; We will experience the encounter with “timeless” people as herders and remote villages.
ART, CULTURE & MUSIC
In the northern Savannah we will be invited at the camp of nomadic herders and we will meet the largest religious and peaceful brotherhood that practices an African form of Islam that rejects fundamentalism and violence. We will focus also on contemporary music: during the weekend nights: we will vibe at the rhythm of music in the hot African clubs. 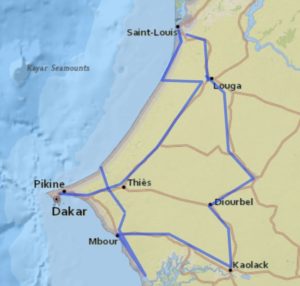 Day 1: DAKAR, THE CAPITAL
Arrival in Dakar and transfer to the hotel.

Day 2: DAKAR CONTEMPORARY METROPOLIS & GOREE
Dakar, the large and vibrant African metropolis that was the cultural and intellectual capital of French West Africa. Reflecting that period, the Presidential Palace and the IFAN Museum (Institut Francais d’Afrique Noire), hosting an important collection of African art objects. When it opened, the museum was directed by Theodor Monod, a celebrated Africanist and one of the greatest Sahara scholars. The museum is currently under reconstruction and so the visit will take place if it is open.
We will visit the Musée des Civilisations Noirs. Opened in December 2018, it is the realisation of Léopold Sédar Senghor’s vision (the first president of independent Senegal, a poet, and Nobel Prize winner). The museum represents the historical and contemporary worldwide cultures, art and soul of Black people, which he called Negritude.
We will also see the Cathédrale Notre Dame des Victoires & Place de Souvenirs. The cathedral dates from 1936 and was built in Neo-Sudanese style, a style inspired by the Sahara and Sub-Sahara adobe mosque architecture..
Arrival at Dakar port to board a ferry and spend a night in Gorée, the island where slaves used to be crammed before being shipped to the Americas. Some restored buildings remain to bear witness of those times.
The Portuguese were the first to establish a presence on Gorée in 1450, where they built a small stone chapel. After the decline of the slave trade from Senegal in the 1770s and 1780s, the island became an important port for the shipment of peanuts, Arabic gum, ivory, and other products of legitimate trade. Thanks to the nice breeze, and the many restaurants and shops, Gorée today has become a pleasant and trendy location. In late afternoon and evening, when the other tourists are gone, we will experience the real feeling of this special island.

Day 3: LAC ROSE & FISHERMEN VILLAGES
Waking up in Goré before the crowd arrives is a pleasure, as strolling in the tiny stone paved alleys of this historical settlement.
Ferry to Dakar and drive to Lac Rose, a shallow saltwater lake surrounded by dunes, also known as Lac Retba. The water is ten times saltier than in the ocean and thanks to this high concentration the lake often shimmers into pink. Workers here collect salt in the traditional way.
Miles of exciting drive on the beach by 4×4 will bring us to discover the largest fisherman village in Senegal. More than 4500 wooden painted pirogues come to the shore with the catch of the day… We will leave our vehicles for a less intrusive, but fun, donkey chariot to approach the fisherman selling to the local market women, to meet the artisans carving the large pirogues, the painters decorating them with bright colors and if we are lucky the “local saint” for final blessing before sailing…
Drive by minibus to the north. At the edge of Lompoul Desert, some 4WD vehicles will be waiting to cross the dunes and take us at our fix camp.
The Lompoul orange sand dunes landscape anticipate the neighbouring Sahara.

Day 4: SAINT LOUIS
Saint Louis, known to locals as Ndar, is a charming ancient town which was a French territory from 1673 until 1895 and the capital of all French West Africa colonies from 1895 until 1902, when the capital was moved to Dakar. From 1920 to 1957, it also served as the capital of the neighboring colony of Mauritania.
It has been the former base of the “Aeropostale” airmail pioneer operation between Europe, Africa and South America. Saint Exupéry, the famous writer, author of “The Little Prince”, was one of Aeropostale pilot following this route.
Located on two islands between Senegal river and the ocean at the southern edge of the Sahara, rich in three centuries of history, cultural background, geography, architecture, Saint-Louis is a “bridge” between the savanna and the desert, the ocean, the river, and the inland, between tradition and modernity, Islam and Christianity, Europe and Africa.
Home to a society with a distinctive lifestyle, Saint-Louis has retained its unique identity. “No one comes without falling in love with the city,” proudly say its people who consider Saint-Louis as the birthplace of Senegalese Teranga, the Wolof word for hospitability
The best way to visit the narrow lanes of Saint Louis is by calash, just as locals do, and walk in the fisherman quarters. Time to stroll in the tiny avenues and enjoy the unique atmosphere of this old town.
We will spend the night at the historic hotel of the town – built in 1895 and now fully renovated – it was here that all Aeropostale pilots use to stay.

Day 5: BIRD SANCTUARY & NOMADIC TRIBES
Early morning departure northwards to discover Djoudj National Bird Sanctuary (Parc National des Oiseaux du Djoudj), a natural oasis formed by hundreds of miles of partially flooded lands which has been declared a UNESCO World Heritage Site. This “humid paradise” between the Sahara and Ferlo desert, is the best habitat and nesting site for over a million of migratory and resident birds – lies on the southeastern bank of the Senegal River and offers a range of wetland habitats that are attended by many migrating birds, some getting here after crossing the Sahara. Out of more than 400 species, pelicans and flamingos are the most common, whereas aquatic warblers are a bit less conspicuous – migrating here from Europe, this park is their single most important wintering site yet discovered. Apart from birds there is also a wide range of wildlife such as warthog and crocodiles. Motorboat excursion leaded by a local guide-ornithologist.
Depending on the season, considering time of migrations and level of water, the visit to Djoudj may be replace by similar experience in Langue de Barbarie, a thin, sandy peninsula, adjacent to the Atlantic Ocean, located in western Senegal, in the neighborhoods of the city of Saint-Louis. The peninsula separates the ocean from the final section of the Senegal River. The Langue de Barbarie National Park is home to an abundant variety of bird species and three species of turtle, including the critically endangered hawksbill sea turtle.
In the afternoon continuation to the Ferlo Desert to discover the arid region where nomadic Fulani tribes herds large droves of zebu. The Fulani (also called Peul) are the largest nomadic tribe roaming West African Savannahs, living in a vast area from Senegal to Chad. Their origins are still covered with mystery. They all share a common and aristocratic cult for beauty and elegance. In the afternoon a local guide will join us for a visit to the neighboring villages and shelters. When the herds come back, we might even be invited to witness the milking process.

Day 6: TUBA BROTHERHOOD
The rarely visited holy town of Tuba (Touba) is the right place to appreciate the hospitality of an African brotherhood. Tuba inhabitants follow Mouridism and the town itself is a sort of theocratic “state within the state”, ruled by a Caliph. The founder of Mouridi brotherhood was a Sufi named Amhadou Bàmba Mbake.
Amhadou Bàmba founded Touba in 1887. The holy site remained a tiny, isolated place in the wilderness until his death and burial at the site of the Great Mosque, 40 years later. The Great Mosque was finally completed in 1963 and since its inauguration the city has grown at a rapid pace: from under 5,000 inhabitants in 1964, the population was officially estimated at 529,000 in 2007
The Mourides have a large social and economic impact in Senegal: thanks to their peaceful (and African) vision of Islam, Mouridism, with other brotherhoods following the cult of Marabouts, has become the bastion that protects Senegal from radical Islam.
During the Grand Magal, annual pilgrimage, the town is visited by four million pilgrims.
Mourides welcome any interest in their traditions. Yet since Tuba is a sacred town, all visitors should accept traditional rules. Therefore, we must apply a considerate dress code: not smoke, not drink alcohol and not listen to music during the visit. If we follow these rules, we will be welcomed. A Baye Fall, a member of a colorful branch of Mouridism, will accompany us during the visit.

Day 7: SEA SHELLS
On the way we stop in Joal-Fadiouth, two villages connected by a bridge. Of special interest in Fadiouth is the fact that is has been built on sea shells, that are also used for the construction of the buildings and decoration. Even the cemetery is located on one of the islands made of sea shells and surprisingly has both Muslim and Christian tombs next to each other.

Day 8: SINE-SALOUM
Sine-Saloum is a region in Senegal located north of the Gambia and south of the Petite Côte. It encompasses an area of 24,000 square kilometers, about 12% of Senegal.
The western portion contains the Saloum Delta. It is in this region that the Saloum Delta National Park is located. 145,811 hectares of the Delta were designated a UNESCO Heritage Site in 2011.
Because it flows so slowly, this delta allows saltwater to travel deep inland.
Private boat trip: visit the mangrove trough different bolongs and discover many species of birds in their habitat. As well as reforestation programs put in place to protect this region.

Day 9: DAKAR OUT
Safari to the reserve of Bandia where you can meet all the big mammals of Africa in 3.500 ha of grand nature: huge baobabs, thorny bushes, whimsical lianas.
In the evening transfer to the airport for the flight out.

Due to the limited quantity of available rooms, please book in advance.

VISAS: Senegal – not required for EU, USA and Canada citizen (ask complete list) For other nationalities a visa can be obtained at Dakar airport.

TRANSPORT: on roads and tracks by Minibus or 4×4

ACCOMMODATIONS: Hotels and lodges are always chosen with maximum care, however due to possible lack of availability in some hotels, the Tour Leader may have to replace some hotels during the tour itself with others of similar standard.

All our trips are designed to be flexible so that we can adapt to external conditions and take advantage of opportunities that arise once there.

Considering the special nature of the journey, some parts may be modified due to unpredictable factors and are based on unarguable decisions of our Tour Leader. Costs originating from such variations will be sole responsibility of the participants. Of course, the Leader will do his/her utmost to adhere to the original program.

Prices could change in case of major changes in services costs, beyond the organizer’s will.